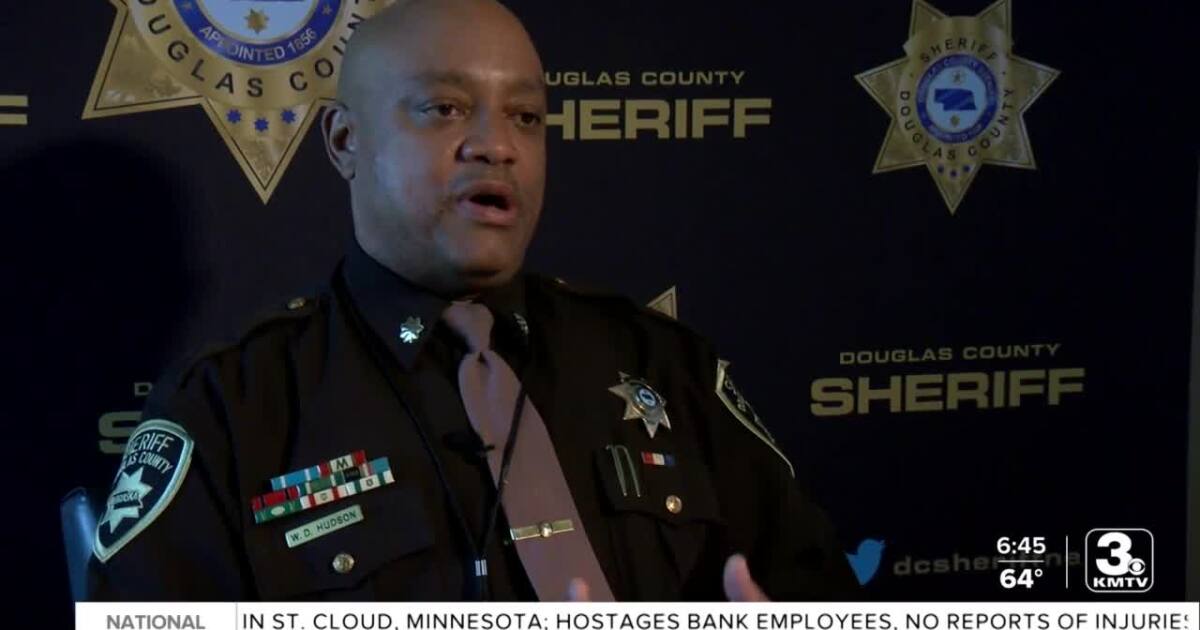 He began his Air Force career from 1986 to 1992. After serving two years in Maine and four years overseas in England, he returned home to North Omaha to determine his next step.

He first got a job at the Douglas County Correctional Department while applying to colleges. He applied to Wayne State College Nebraska and was accepted but considered staying with DCDC.

“Part of me said I’ll stay where I am, but my older brother said you can always make more money, you can always get another job, but it’s time to get your education “, Hudson said.

He earned a bachelor’s degree in criminal justice and applied for law enforcement jobs in Metro Omaha.

“I applied for the Douglas County Sheriff‘s Office, the Omaha Police Department, and the Nebraska State Patrol. And I said, whoever calls me first is where I I’ll go. And the sheriff’s department called me first,” Hudson said.

Throughout his 26 years with the DCSO, he was able to rise through the ranks, starting at sergeant.

This promotion made him the DCSO’s first black chief deputy.

“It’s a little disappointing that we’re in 2021 and we’re still saying, ‘The first of this’, but I’m happy to be. I stand on the shoulders of those African Americans who came to this department before me because without them I wouldn’t be in the position I am in now,” Hudson added.

“I’m always up for a challenge and it’s definitely a challenge to go from being in charge of one office to six different offices,” he said.

As deputy leader, he upholds the commitment to serve public and community service. An active member of the community himself, he believes that the work of law enforcement officers in the community can be beneficial to police-community relations.

Hudson is a board member of the Black Police Officers Association. He is also a member of the Latino Police Officers Association, Alpha Phi Alpha Fraternity Incorporated, National Coalition of Negro Women, Men Against Domestic Violence, Women’s Center for Advancement, and 100 Black Men. He recently became a counselor for Metro Community College’s criminal justice program.

It’s important to Hudson to represent the good side of the police.

“I know not everyone can put in hundreds of overtime hours each year off duty, without getting paid for doing things that I do, but the difference is that I really care about our community and I want to see our community and law enforcement build that bridge. and come together more, so if I have to, absolutely no problem,” he said.

One of Hudson’s goals as chief deputy is to diversify the department.

“What I’m trying to do is change a few rules with regard to our hiring process so that we can try to attract more minorities. I think having more minorities not only ethnic but also gender brings a different diversity of thought. So that can only make us a better agency,” he said.

Under Hudson’s leadership, the DCSO will also soon launch a community survey to get more direct feedback from residents on how they think the service is doing and adapt or improve where necessary.

Another goal for Hudson is to be a bridge builder and to further connect DCSO with communities from all walks of life and to break down any negative perceptions some may have of law enforcement.

“As the motto of the 100 black men goes, ‘What they see is what they will be.’ I hope young people will look for a path to law enforcement but if they don’t consider being a law enforcement officer, I hope they will at least see me as an enemy not like someone who wants to oppress them or put them down and instead look at me as someone trying to help them and be their friend,” he said.

As a black law enforcement officer, Hudson says it can be an emotional experience.

“It’s had an impact on me. As I protect protesters, people are yelling at me saying Black Lives Matter. Well, I get that – I’m an African American man. I’m here to protect your right to yell at me,” he added.

Whether he’s in uniform or not, Hudson hopes to change people’s perceptions and continue to serve his community.

“I want the public to see that before I put on this uniform my name is Wayne Hudson, but even after I put it on my name is still Wayne Hudson, I’m the same person,” he said. declared. “Don’t oppose me just because I’m wearing this uniform. Talk to me. Let’s sit down, chat and humanize each other. It’s hard to hate yourself when you’re sitting across from someone.”

Download our apps today for all our latest coverage.

Get the latest news and weather straight to your inbox.