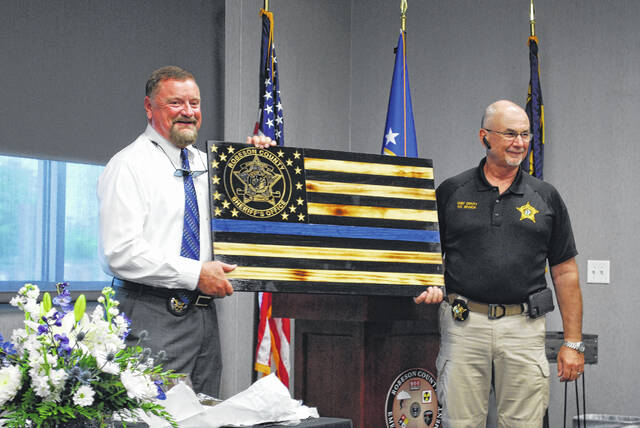 LUMBERTON — Several people gathered Thursday to celebrate nearly 60 years of combined service by the chief deputy of the Robeson County Sheriff’s Office and a detective who will retire next week.

Maj. Howard Branch, who served as Deputy Chief of the Sheriff’s Office, and Stephen Terry Odum, who served as Crime Scene Investigations Detective were honored at the event. Both men will serve their final days in their roles on Tuesday. Odum and Branch served just over 28 years each as employees of the sheriff’s office.

Sheriff Burnis Wilkins said he was sorry to see Branch and Odum go. But, they will continue to be part of the sheriff’s office family after they retire, he added.

“I appreciate the service from both of you for sure,” he said.

Odum joined the sheriff’s office on Dec. 6, 1993, according to the Robeson County Human Resources Department.

Odum has served in a variety of roles, including as a K-9 manager, detective, and school resource officer.

Branch plans to return to the sheriff’s office and work part-time in the future, the outgoing chief deputy said.

Odum told The Robesonian that he intends to focus on spending time and taking care of his retired family members.

Several people shared fond memories and words of appreciation for their service during the ceremony held at the Robeson County Emergency Operations Center.

“Over the past month, you’ve really given me knowledge,” Sheriff Maj. Damien McLean said, speaking to Branch.

McLean, who will be promoted to chief deputy on June 1, told Branch he’s listening to him about the responsibilities he’ll inherit with the new role.

“Howard has been a wonderful boss,” said Katherine Floyd, an animal cruelty investigator with the Robeson County Sheriff‘s Office.

Floyd also told Odum that she would miss having lunch with him every day.

“They don’t make people like that anymore,” she said. “Thank you for being good people.”

Odum and Branch received plaques of appreciation and various gifts upon their retirement. Branch’s family also presented him with a display rack containing all of his badges worn during his career as an employee of the Sheriff’s Office.

Both men shared words of gratitude to the room filled with family members, colleagues and friends. They also spoke about the dangerousness of the law enforcement profession with The Robesonian and how the perception of officers has changed over the course of their careers.

Each of them echoed those words as they addressed their colleagues at the ceremony.

“I enjoyed working with each of you. Be careful, I love you and hope you get to this point,” Odum said.

“I’ve worked with many of you for years, some of you not as much, but I appreciate each and every one of you, love you all and hope you get to this point one day” , Branch said of the retirement.

The future retirees were joined in support by their family members and wives who beamed with enthusiasm at the occasion.

Donna said Terry was very passionate about his job and had “worked hard” to retire.

“He enjoyed it,” said Gina Branch, of her husband Howard’s job with the sheriff’s office. “We are happy for him.”