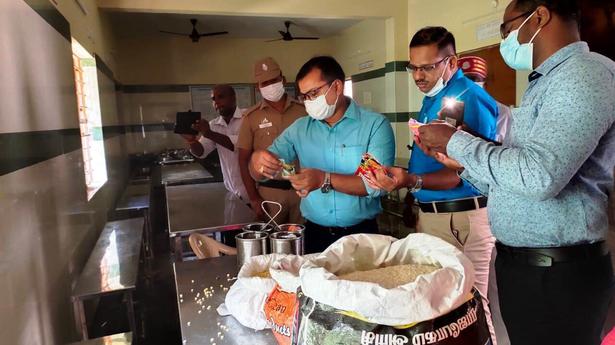 The principal of the Centre’s Eklavya Model Residential Higher Secondary School in Pudur Nadu, near Yelagiri Hills, Tirupattur, has been suspended after parents complained about the poor quality of food served to students, who are mostly members of the tribes.

Tirupattur collector, Amar Kushwaha, asked the project officer of the tribal welfare department to issue a suspension order to the principal, T. Ramachandran, after inspecting the school on Tuesday.

“A notice has been sent to the private contractor supplying essential food items to the school, advising them to provide good quality items,” Mr Kushwaha said. The Hindu.

The school, run by the Tribal Welfare Department, has 498 students from three panchayats including Pudur Nadu and Nellivasal, covering 37 tribal dwellings along the Jawadhu hills. A few days ago, parents complained to district authorities that students were being served poor quality food in unsanitary conditions, particularly in the kitchen. They also said the campus lacked adequate drinking water facilities.

Officials said that currently three godowns, one in the city of Tirupattur, Ambur and Vaniyambadi, were being used to store essential food stocks procured from the Food Corporation of India (FCI) and the Department of Supplies civilians of Tamil Nadu on a monthly basis.

An audit is also conducted by an officer at the rank of assistant collector for at least four district government hostels each month. Stock typically purchased from government agencies is distributed to all public schools, 31 hostels and more than 900 fair-price stores in the district. In such a case, poor quality food at specific tribal schools looked questionable, an official said.

However, officials admit that the problem of regular water supply to domestic areas including schools and hostels has been a challenge due to limited water sources in the district. Construction of Overhead Tanks (OHT) in Tirupattur and Madhanur Blocks will be completed in two months. Similarly, the combined water supply system will become operational by September, officials said.

Meanwhile, health officials in Tiruvannamalai said samples taken from an Anganwadi center in the village of Paramananthal in Chengam after a lizard was allegedly found in the food showed no signs of contamination.

“The food served to children at the center is safe to eat. No trace of contamination was found,” said B Kandhan, Project Manager, Integrated Child Development Services (ICDS), Tiruvannamalai.