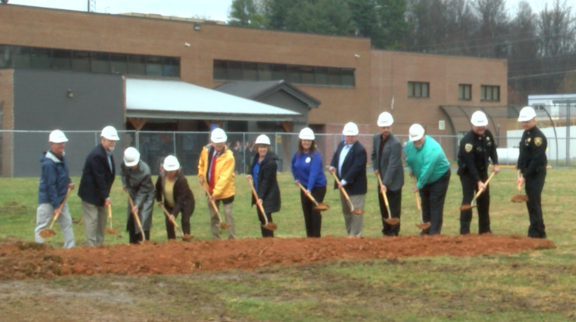 “And regardless of the weather, it’s a great day for Sullivan County,” Mayor Richard Venable said.

Despite the rain, 13 people ceremoniously shoveled the first piles of dirt to mark the start of a $96 million jail expansion project in Sullivan County.

“Once in a while you have to run a generational project like a school or a prison and luckily our county commission stepped in and said yes it’s time we have to do it,” Venable said.

The current Blountville Jail is over 30 years old and Sheriff Jeff Cassidy knows it’s time to modernize it.

“Right now our prison has a lot of low ceilings, a lot of blind spots, it’s overcrowded and understaffed,” Cassidy said. “You know, it’s just a poorly designed building.”

The planned expansion will provide a modern upgrade and, perhaps most importantly, an increase in the number of beds. The new building should accommodate 560 additional prisoners.

This increased capacity is crucial, as there are currently 929 inmates housed at the Sullivan County Jail when the planned capacity is only 619.

“We have enough beds not to come back here, it will probably take 30 or 40 years,” Venable said.

Jonesborough man charged with hitting brother with vehicle during fight

Cassidy assured that the improved facility will allow prison officers to separate the most violent criminals from the rest of the prison population. It will also provide less violent offenders with the space to participate in rehabilitation programs.

Venable explained that funds from the US stimulus package will help ease the cost to taxpayers.

“The next generation will help pay for this prison,” Venable said. “It’s not on the shoulders of these property taxpayers now. That’s the best thing about county government is that you can spread your costs over generations, and that’s what we did with this jail.

“You can’t really put a price tag on public safety,” Cassidy added. “These offenders who are here to prey on victims and commit these crimes, they need to be locked up.”

“I was hesitant to say how many days or what date it is because now I can start counting,” smiles Venable.