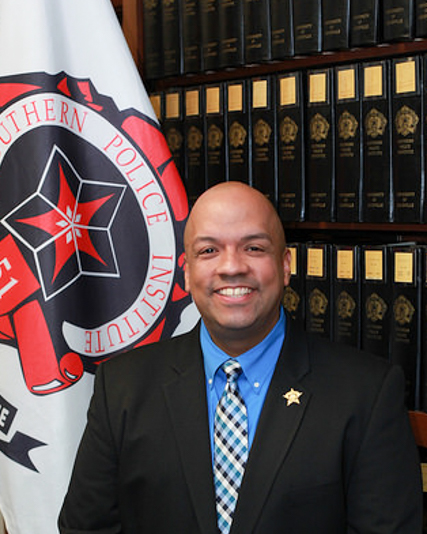 FUQUAY-VARINA – After a nationwide search and process involving community members, the City of Fuquay-Varina has announced the selection of Brandon Medina as the city’s new Chief of Police. Medina fills the post created by the retirement of longtime police chief Laura Fahnestock in February. Medina will begin work on April 11.

For the past seven years, Medina served as Deputy Chief of the Nash County Sheriff’s Office, where he oversees 145 employees. In her role with the Nash County Sheriff‘s Office, Medina manages day-to-day operations including policy development and implementation, personnel processes, budgeting and communications. Previously, Medina had 14 years of progressive experience with the Rocky Mount Police Department as a police lieutenant in the Criminal Investigations Unit.

Medina was born and raised in New York, leaving at age 17 to join the military. He served honorably for 20 years in both the United States Navy and the United States Army after being honorably discharged. He retired from the Army National Guard in 2013.

City Manager Adam Mitchell said, “I am very pleased that Brandon Medina has accepted my offer to be the next Fuquay-Varina Police Chief. Brandon comes to us with considerable experience in community policing and community engagement and his involvement in leadership will most certainly add value to our law enforcement organization. The police chief’s search process was thorough and considered input from senior city leaders, outside law enforcement professionals, community citizens and business leaders. Brandon has clearly demonstrated that he has the skills, temperament and attitude to be an effective police chief in Fuquay-Varina.

Medina is excited to start work. “As a newly selected leader, I will strive to utilize the training and experiences gained from my more than 20 years of honorable service in the U.S. military, 14 years of progressive experience in various roles within the Department of Rocky Mount Police and 7 years as the Chief Deputy of the Nash County Sheriff’s Office.

“These opportunities have certainly provided me with first-hand experience aimed at enabling us to continue the Fuquay-Varina Police Department’s excellent reputation for public safety, community relations and working with local and regional partners. Additionally, these opportunities along with the continued practices of fairness, vigilance, professionalism and dedication by the honorable men and women of the Fuquay-Varina Police Department will propel our agency to even higher levels of excellence.” , said Brandon Medina.

Fuquay-Varina Mayor Blake Massengill said: “I think Brandon brings a wealth of knowledge to his new role as Chief Constable. His record reflects a reputation for effective and collaborative leadership, and he has clearly demonstrated a commitment to community policing. Brandon is also fluent in Spanish which helps reach a growing demographic. I believe Brandon has the right combination of attributes to take Fuquay-Varina to the next level of policing.

Medina is an adjunct professor at North Carolina Wesleyan College. He has two sons who will soon join the US Air Force, continuing the family tradition of military service. Medina is a board member of the Child Advocacy Center of North Carolina and a member of the American Legion and Veterans of Foreign Wars (VFW).

“I am thrilled to become an active member of the Fuquay-Varina community,” Medina said.