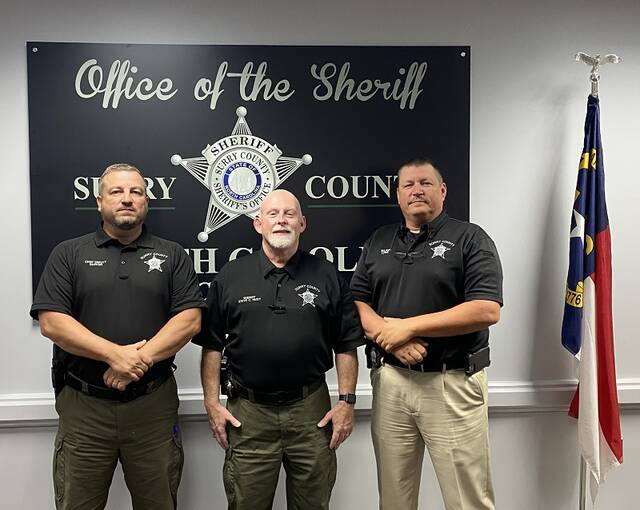 “I am beyond blessed and honored that the Sheriff gave me this opportunity. I will work tirelessly to carry on the road mapped out for me by the former chief,” Lowe said this week at the Surry County Courthouse in Dobson.

Major Lowe joined law enforcement in 1991 before retiring in 2010 from full-time duty. He remained a part-time sworn officer and retained his certifications before returning full-time in 2016.

Lowe steps into the role vacated by Barker, who said this week he believes 30 years of law enforcement is enough and is now ready for “a new chapter in life”.

Barker leaves the Sheriff’s Office after four years of service after leaving the Mount Airy Police Department where he began serving in September 1993. He transitioned from patrol duty to detective and became a lieutenant for all criminal investigations in 2010.

After 26 years of service in the city, Barker said it was an easy decision to move “when Sheriff Hiatt came along and asked me to come on his staff in 2018.”

As chief deputy, Lowe explained that he will be Sheriff Hiatt’s second-in-command on a force that “has grown a lot in the last few years.” He will also assume a leadership role with respect to the department’s budget and personnel matters.

In the latter area, he knows the road will be difficult, finding candidates for law enforcement jobs is a struggle. “At the moment in law enforcement it is difficult to try to find staff, nobody wants to be a civil servant.”

“We fight it like others, although I think we’ve fought it better than some agencies over the past few years. We are still facing (problems) right now trying to find these people,” Lowe said.

Knowing the solution to attracting new applicants to law enforcement, Lowe said, is the million-dollar answer. Barker said, “I think it’s a calling a person has to have to get into any type of public service.”

These problems may be exacerbated by a shift among some Americans toward demonizing law enforcement on all sides for the actions of some within a system that some see as fundamentally broken.

Barker noted: “It’s not just the police, it’s also the fire and rescue services. Many of them are volunteers, we are not, they have made a conscious effort to enter emergency services to be of service to their city or community. I think there has been a loss of interest in that.

“I saw,” Lowe agreed. “In high school I was a volunteer firefighter, it was something you wanted to do for the community. It was a desire I had, I don’t know why more people don’t do it anymore. This may be the environment of today’s world.

Barker notes that it’s not a problem of lack of local pride, but it’s something that happens everywhere. “The Sheriff, Larry, and I are in close contact with our counterparts across the state. Everyone has problems. »

Surry County Sheriff‘s Office leaders have bristled at the thought that a staff shortage could hamper the services they provide or their response time. “One of the good things about people who get involved in service to others is that heart they have for it. They pick up the slack. Sometimes you do more with less, but those people who are in there, they are the real heroes in my opinion,” Barker said.

“For all intents and purposes, these men and women could go on to earn more in the private sector, but choose to stay in this business for this reason, there is no other reason.”

Management took the time to discuss the new detention center. Progress is being made, with Barker reporting that the limitation and landscaping would likely be advanced in August.

Inside, the last cell was placed in June and the finishing works are in progress. “It’s a big building, so they have to go through it and clean it, paint it, etc. From what I hear, we are on the right track. Weather is the elephant in the room,” Barker said. Estimates currently have construction done in early 2023 for a late summer opening.

“My understanding is that everything is under one roof and the insulation project is well underway,” Barker said. “If you go from this week to the next, the differences are leaps and bounds.”

“There’s a reason we’re building a new prison, the reason is it’s outdated,” Barker added. “For today’s times, it is divided into an odd layout” that is not conducive to effective management or consistent with modern prison design.

In another shift in modern tactics, the War on Drugs finds county investigation deaths occurring that are linked to the scourge of opioids. Arresting and prosecuting end users of these drugs will never end the plague, but Lowe said “our county is leading the way and trying every option possible” to fight back.

After a 13-month investigation into the overdose death of Melissa “Shannon” Dublin and the arrest of Chris Wayne Mosley for second-degree murder, leaders said they would consider asking for more resources to add to opioids. death investigations. The County Drug Recovery Office and the Sheriff are also eagerly awaiting space in the new jail for drug counseling and education.

On the radar recently with county commissioners has been county animal control. Sheriff Hiatt said a brainstorming session was scheduled for Wednesday to discuss the topic. Lowe said: “We’re looking to try and improve on what we have. We do our best for the animals because at the end of the day, that’s what it’s all about. »

Lowe is ready for the task at hand, yet knows he doesn’t know everything yet. His goal for his tenure is laudable: “To continue to push the sheriff’s office professionally to the highest possible level.”

Milwaukee County jail vandal arrested; throw a trash can in front of the front door