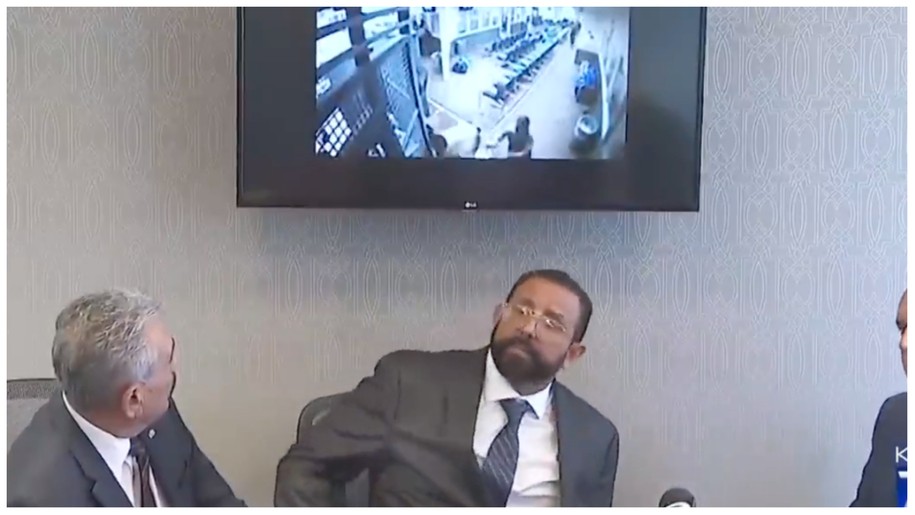 Warning: The videos in this story contain footage of police brutality that may be triggering for viewers.

6 Los Angeles County Sheriff’s Deputies violently beat inmate Jesus Soto Jara, as seen in leaked video at the Inmate Reception Center. This wanton attack is NOT the first time this agency has faced allegations of excessive force! These deputies must be accountable! pic.twitter.com/Cfrj98n4km

Soto Jara was initially arrested by the Claremont Police Department and charged with four misdemeanors and two drug and firearm possession charges, according to the Los Angeles County Sheriff‘s Department.

“Prior to contact with deputies, Mr. Sotojara was involved in an argument with another inmate and removed his shirt to fight the other inmate,” Los Angeles County Sheriff Alex Villanueva said in a shared statement. on social networks. “Mr. Romero claimed that the contact with Mr. Sotojara was ‘unprovoked’ and that he was not 100% involved. That was incorrect.

Villanueva said in her statement that the incident was “immediately recognized” as a use of force case that “sought a response from our Internal Affairs Bureau (IAB).”

“IAB responded and took responsibility for the investigation,” the sheriff said. “The incident has also been referred to the Internal Criminal Investigation Bureau (ICIB). The matter has also been presented to the Office of Inspector General.

Inspector General Max Huntsman told the Daily Kos in an email Thursday that the sheriff’s department misrepresented its cooperation in the statement.

“The Sheriff’s Department described themselves in a press release as having ‘presented’ the case to us. We were told about it and shown a video. We have not received copies of the video nor are we authorized to actively monitor LASD investigations nor do we receive cooperation in our own investigations,” Huntsman said. “The sheriff’s department has actively interfered with our watchdog function so severely that the county has sued them multiple times over this issue.

“I am under criminal investigation by Sheriff Villanueva to be Inspector General. So, in this context, to say that the case was “presented” is misleading. »

“Last month a use of force at the inmate reception center involved broken bones and force to the head and another prisoner collapsed while waiting two days for a medical evaluation, later dying. Our prisons are dangerously overcrowded, which has serious consequences for security. »

Activists lobbied to see the men’s central prison, in particular, closed. Los Angeles County Supervisor Holly Mitchell told the Los Angeles Times in March that the county is unable to do so. Instead, she said she was pushing to use state grants to build prisons for diversion programs. “We don’t want to build prisons, but we want to use it to serve the same population,” Mitchell said. “The point is how quickly we and the community can prepare to expand the services we need on the care side of our ‘Care First, Jails Last’ initiative.”

“We have homicides, we have people running amok in the streets, everyone has a gun, every gangster is trying to shoot other gangsters and sometimes innocent victims,” he told the Time“and these people will eventually end up in jail. And there’s no place to put them if you tear down the central men’s jail.

Today a press conference was broadcast by Fox 11 alleging that six LASD deputies used excessive force on a docile inmate who was arrested for a non-violent crime. The use of force in question took place on July 3, 2022, at approximately 11:50 p.m., at the Inmate Reception Center, not at the Central Men’s Jail. Upon review, it was immediately recognized as a use of force that sought a response from our Internal Affairs Bureau (IAB). IAB responded and assumed responsibility for the investigation. The incident has also been referred to the Internal Criminal Investigation Bureau (ICIB). The case was also presented to the Office of Inspector General.

The attorney representing the inmate involved presented many of the allegations as facts, alluded to as “verified” by an LASD source, but which are categorically incorrect and misleading. He merely provided a fragment of the facts surrounding the incident, including the inmate being intentionally removed from camera view and beaten. This is incorrect, in fact the LASD has multiple cameras covering the entire incident. The video provided by Mr Romero was apparently recorded from the Dvtel system and released without official permission and did not capture the entire incident. Prior to contact with deputies, Mr Sotojara had been involved in an argument with another inmate and had taken off his shirt to fight the other inmate. Mr Romero claimed the contact with Mr Sotojara was “unprovoked” and that he was not 100% involved. It was incorrect.

While we cannot comment on ongoing investigations, we can confirm that the subject involved in the force has been seen by medical professionals, as is standard procedure in all force-related incidents. In fact, the incident happened in the IRC clinic which has medical personnel immediately available. Afterwards, he received further medical care at TTCF Urgent Care for a higher level of medical care. And addressing the documentation of his medical care, Mr Romero said: ‘My experience is that they don’t when in their care. Again, this is categorically untrue, all force injuries and/or incidents are fully documented, and all medical issues are handled and fully documented by Correctional Health Services.

This press conference and video released out of context and without permission clearly demonstrates why the entire investigation must be completed, with proper oversight, to ensure that all facts are presented responsibly. Publishing a snippet of an incident with allegedly “verified” inaccurate claims is irresponsible and bordering on bad faith.

Mr. Sotojara was arrested on July 3, 2022 by the Claremont Police Department on the following counts:

• 11307.1 A HS; Possession of a controlled substance while armed with a loaded firearm (felony).