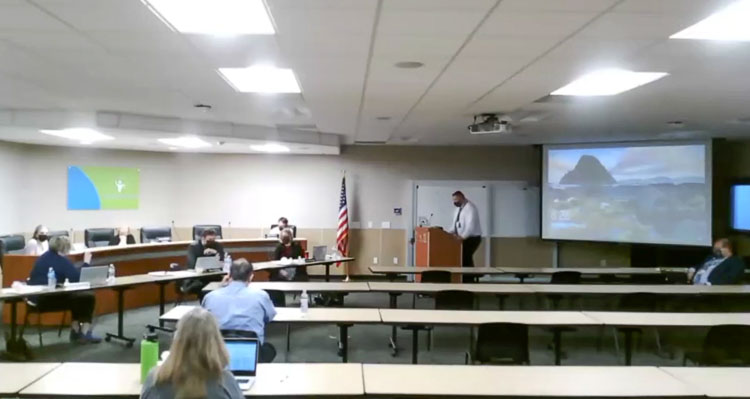 At a May 25 meeting of the Evergreen School District Board of Trustees, Chief Assistant District Attorney Rachael Rogers said “policing in the United States is biased.”

In addition to her role in the district attorney’s office, Rogers is also a member of the ESD board of directors, to which she was elected in November 2019. Video circulated this week of the meeting, in which Rogers spoke for more than five minutes. why she is not in favor of police officers in schools in the district serving as school resource officers (SROs).

“They’re not protecting our kids,” Rogers said. “Our SROs are trained police officers. They are trained to see people as threats. They view our children as threats. Data shows that schools with more police, more ORS, are more likely to refer children to law enforcement, leading to charges and arrests. Black students are more likely to be arrested than any other student at school.

Rogers was speaking in general terms. The Clark County Sheriff‘s Office currently has no officers serving as an SRO in Clark County.

“Having a police cruiser in a high school parking lot every day, think about what that feels like to kids as they walk into that school,” Rogers said. “Yes, I agree, it would be great if all of our children had a wonderful relationship with the police. But the fact is that policing in the United States is biased. Something has to change systemically, in a meaningful way, to change that for our children and our schools. We send our children of color to a school where they are seen as a threat. Whether consciously or not by the OAR, they are seen as a threat and as someone against whom you have to protect yourself and not protect yourself.”

Specifically, the board letter highlighted the following statements from Rogers:

• “Most of the time they [police] struggle around this idea of ​​fairness and how policing people of color performs in the real world.

• “I don’t like the idea of ​​having police in our schools and the lack of trust we have in our children. »

• “They [police] do not ensure the safety of our children.

• “They are [police] trained to see people as threats. They view our children as threats.

• “The fact is that the police in the United States are biased.”

The letter went on to state that “Associate Attorney General Rogers’ emotionally charged and misplaced statements are in no way disparaging, demoralizing or infuriating to our members who work hard to protect our community, especially our children. A number of law enforcement officers throughout Clark County have become involved and donated their time to the Police Activities League program. PAL embeds law enforcement officers, in their spare time, to help mentor and encourage youth (especially disadvantaged youth) through sports programs, reading events, and other activities to foster the development of these children and to build trusting and healthy relationships between Clark Youth and county law enforcement officers through positive interaction. Our office walls are lined with thank you cards and letters from children and students in Clark County.”

A key issue with the Deputy Sheriff’s Guild is whether or not Rogers’ comments reflect the position of the district attorney’s office.

“While the Clark County Deputy Sheriff’s Guild respects an individual’s right to free speech, Chief Deputy District Attorney Rogers was not speaking as an individual when she made these statements,” reads the letter. “Posted on the Evergreen Public Schools website, Rachael Rogers’ profile as a school board member lists her as ‘Clark County Senior Assistant District Attorney.’ In light of all of this, it is the position of the Clark County Deputy Sheriff’s Guild that Rachael Rogers made these disparaging remarks about law enforcement while acting as a representative for your office.

The letter from the Deputy Sheriff’s Guild also underscored the irony that the district attorney’s office seems uniquely positioned to identify systemic racism in Clark County and to prevent it. In his comments in the May 25 video, Rogers said, “The first time we’ve ever involved a child in the system, even though it’s, you know, in the juvenile justice system in Clark County, where they can cause a diversion, it’s still on their record, it still counts, they still go to jail sometimes, they still have to be involved with probation counselors, and that just goes to show how likely it is that we’re going to see them again in as adults in the criminal justice system.”

Members of the Deputy Sheriff’s Guild Board of Directors responded in their letter, stating:

“Mr. Prosecutor, after an arrest or dismissal, law enforcement officers have nothing to do with the case unless requested by an assistant prosecutor for follow-up or to testify in court. only your office knows if a minor has a criminal charge, if they can be diverted, or what their sentencing recommendations are.You have appointed Rachael Rogers as Chief Assistant District Attorney, right behind you.

“In order to achieve uncompromising standards of conduct, Deputy Sheriffs and Deputy District Attorneys must maintain healthy and professional working relationships. These relationships are imperative for us to successfully enforce the law and maintain the public peace impartially. These healthy and professional working relationships depend entirely on mutual trust and respect. Chief Assistant Attorney Rachael Rogers’ blatant disrespect to law enforcement, through her public statements, has caused an outcry among our members and further generated a seemingly deep-rooted rift in trust between our offices. .

Golik said he watched the video and listened to Rogers’ comments.

“She was speaking in her role as an elected independent,” said Golik, who said he read the comments in the Guild’s letter stating that her position was that Rogers’ comments were made while she was “acting as as representative” of the Office of the Attorney General. “I’m reading this. As I indicated, she was acting and speaking clearly in her role as an elected independent.”

As a result, Golik said Rogers was not disciplined and his position in the prosecutor’s office was unchanged.

“She’s a highly valued member of the bureau who has many years of good work as a prosecutor and a lot of working closely with law enforcement in a highly collaborative way,” Golik said.

Golik was then asked what the prosecutor’s office is about when it comes to bias against law enforcement officers?

Golik was then asked about efforts to restore the relationship between his office and the Guild of Officers.

“I look forward to our regular work being the strongest way to improve our relationship and for the work to be done every day between Deputy District Attorneys and Deputy Sheriffs and I believe there is a great deal of mutual respect in those working relationships,” said Golik, who added that he thought “we will have discussions at various times in the future.”