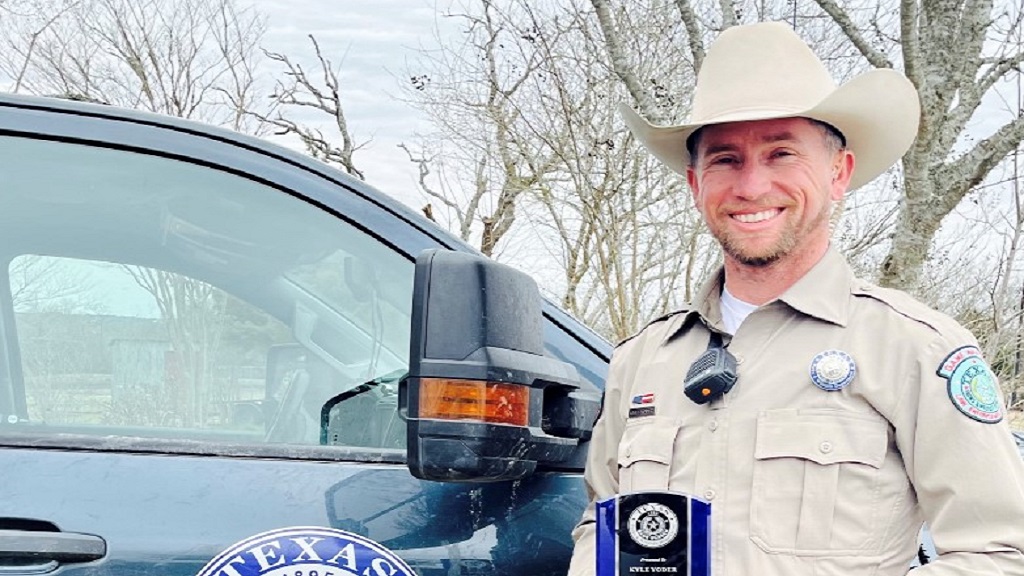 The Washington County Game Warden was recently named the 2021 Game Warden of the Year for Texas Department of Parks and Wildlife Law Enforcement Region 7.

Kyle Yoder was evaluated and selected for the award based on his excellence in categories such as Public Awareness, Attitude, Teamwork, Achievement, Efficiency/Innovation, and Leadership. He was chosen from more than 75 other game wardens eligible for the award.

Region 7 covers much of central Texas, stretching from Sealy to Brownwood, Waco to Llano, and most of the area in between.

Yoder earned a bachelor’s degree in criminal justice from Blinn College and Sam Houston State University. He was accepted soon after in the 1960sand Game Warden Cadet class in 2015. He graduated after seven months at the Game Warden Training Center near Hamilton.

Yoder was first stationed in Pecos County, West Texas, before moving to the area four years ago.

Full press release from the Texas Department of Parks and Wildlife:

Kyle Yoder has been selected as the 2021 TPWD Law Enforcement Region 7 Game Warden of the Year. He was chosen from more than 75 other game wardens eligible for the award. Region 7 covers much of central Texas, stretching from Sealy to Brownwood, Waco to Llano, and most of the area in between.

Kyle was evaluated and selected based on his excellence in the following categories.

PUBLIC AWARENESS – the candidate excels in deliberate and effective communication with the public. Seeks opportunities to educate, inform and exchange ideas with the public on Agency programs and priorities.

EXCELLENCY – the candidate demonstrates a willingness to go above and beyond the call of duty by doing more than others expect.

ATTITUDE – the candidate presents an infectious and positive perspective for his colleagues and the public in all that he says, does, writes and produces. Takes personal responsibility for meeting commitments and resolving issues.

TEAM WORK – the candidate demonstrates intra- and inter-divisional cooperation within the agency; willing to participate and help others; keeps others informed and up to date; gives specific and useful feedback to improve job performance; shares his own work experiences and useful information to help accomplish the agency’s mission.

ACHIEVEMENTS – the candidate has made particular achievements in the performance of duties related to the job.

EFFICIENCY/INNOVATION – the candidate continually seeks to improve his efficiency at work. Identified ways to increase voter satisfaction and cost savings for the agency. Has taken steps to achieve implementation.

LEADERSHIP – the candidate demonstrates standards of excellence and professionalism; exemplifies standards and conduct that reflect honesty and fairness; sets an example to others through his behavior.

Kyle Yoder grew up with a strong breeding and free range background in North Central Texas. He received a bachelor’s degree in criminal justice from Blinn and Sam Houston State. Shortly after graduating from college, he was accepted in the 1960sand Game Warden Cadet class in 2015. He graduated after seven rigorous months at the Game Warden Training Center near Hamilton, Texas. During their training, all Texas game wardens undergo traditional state police training to pass the TCOLE state exam that regulates law enforcement certification in Texas. In addition to traditional police training, game wardens learn wildlife law, species identification, boat operations, off-road driving and various other skills to meet the challenges of being a game warden on field.

After graduating, Kyle was stationed in Pecos County where he patrolled the rugged terrain of West Texas. 4 years ago, he and his family moved to the area. He is currently stationed in Washington County. He appreciates the diversity of landscapes in the region. The abundance of outdoor recreation means there is never a shortage of work. He enjoys working hand in hand with local law enforcement as well as meeting with landowners, local stakeholders and community groups. He has special training in poison control and is keen to keep our roads, rivers and lakes safe for all to enjoy. He has received numerous awards and recognitions for his lifesaving actions on roads, waterways and backwoods beyond what was expected. He is passionate about conservation law enforcement, but even more so about helping those in need.

When not on patrol, he spends as much time as possible with his wife and children. Even though his job keeps him outdoors, his hobbies also keep him outdoors as he enjoys hunting, shooting and training.