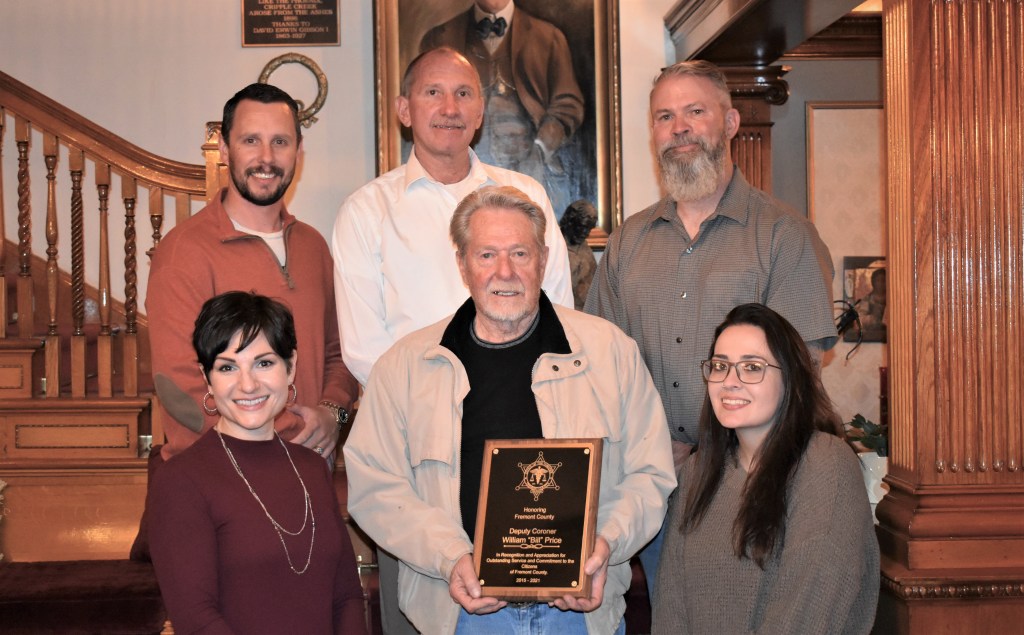 William “Bill” Price assisted Fremont County Coroner Randy Keller in his initial campaign in 2014, then served under him as Deputy Coroner for nearly two full terms.

Price, 81, retired after seven years in the coroner’s office, but he is keeping his credentials and plans to remain on standby.

The Fremont County native was honored for his service at a March 12 retirement ceremony at the Gibson Mansion.

“We wanted to recognize Bill for his commitment to the people of Fremont County,” Keller said. “Bill has done a wonderful job for this office,”

Keller said he has a great team and Price fits right into it.

“I’m sorry to see him back down, but, of course, he’s always welcome to come back anytime,” Keller said. “I cannot say enough about Mr. Price and all he has brought to office and representing the citizens of Fremont County.”

Price’s recent retirement wasn’t his first, however, it was actually his third.

He retired from a 30-year career with the Colorado Department of Corrections in 1996. He started as a corrections officer and worked his way up to warden, after working for a short time under Wayne K. Patterson.

“I’ve seen a lot of changes in corrections over those 30 years,” Price said. “I met a lot of interesting people.”

Some of the most notorious inmates he knew were James Sherbondy, the last of 12 inmates captured after the December 30, 1947 break from the State Penitentiary; Joseph Corbett Jr., convicted of the 1960 kidnapping and murder of Adolph Coors III, heir to the Coors beer fortune; and Ron Lyle, who after his incarceration was the 1970 AAU National Heavyweight Champion, winning his first 19 professional fights.

“It was a great experience,” Price said. “We went through a number of unrest and some riots; in the 1960s, the social revolution spilled over into correctional services.

He also met celebrities who had come to the area to visit the prison, including Roy Rogers and Dale Evans, Linda Cristal and Sue Lyon, who in 1973 married convicted murderer Cotton Adamson inside the prison.

“(Lyon) even offered me a personal bodyguard position in California, but I respectfully declined,” Price said. “She made a lot of waves while she was here.”

In the mid-1980s, Price was appointed warden of the new Arkansas Valley Correctional Facility in Crowley County. He worked there until the mid-1990s, when he returned to Cañon City to serve as the East Complex’s Minimal Centers Director.

His management style was a bit different from most goalkeepers. When he was not attending meetings or spending time in the Legislative Assembly, he roamed the facilities talking to staff and inmates. He even sat on an inmate’s bed in his cell during his visits, much to the surprise of his staff.

“They couldn’t understand, they said, ‘What are you doing? Guardians have never been here before,” he said. “I would come in during night shifts and talk to tower officers. … I think I’ve earned a lot of respect from the staff by spending time with them on different shifts.

Upon retirement from DOC, Price and his wife purchased and then operated the Dale Ely and Associates auction business for 10 years. Price continues to volunteer his time as an auctioneer for many local nonprofits.

After retiring from the auction industry, Price helped Keller run his campaign. When Keller was elected, he asked Price to help him.

Price said the sight of dead bodies didn’t bother him because he had seen plenty of them during his career in the prison system.

“It was a great experience,” he said. “I enjoyed working for Randy and with the team.”

Price and his wife, Lynn, have three adult children, five grandchildren, and seven grandchildren. Now officially retired, at least for now, the couple plans to travel and continue riding motorcycles. A Harley Davidson for Price and a Yamaha for Lynn.