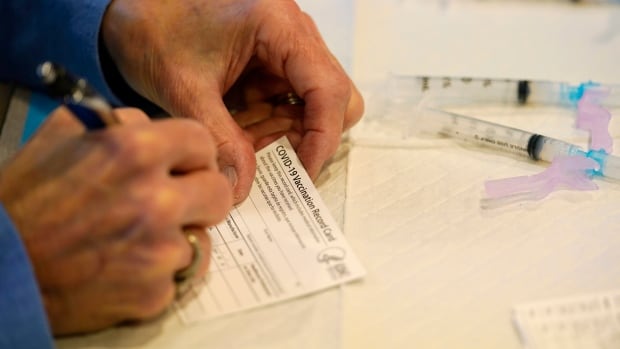 A Nova Scotia city council has agreed to ask for proof of vaccinations from people entering the local arena after the superintendent suggested staff “may be breaking the law” and failing to follow provincial health rules.

People participating in non-essential activities in Nova Scotia, including attending indoor sporting events, will be required to show they are fully immunized against COVID-19 beginning October 4.

Barrington manager Eddie Nickerson said earlier this week he did not feel comfortable asking city workers to ask people for proof of vaccinations and offered to close the Sandy Wickens Memorial Arena to spectators , to close the rink to everyone or simply to ignore public health regulations.

At Thursday’s council meeting, Nickerson said he changed his mind about not following the policy and apologized for making the suggestion.

“I think it’s inappropriate as a prefect of a municipality,” he said. “I would like to apologize.”

Residents ask the municipality to fight against the policy

The council voted unanimously to require proof of vaccination, despite concerns raised by a number of local residents who asked the municipality to “take a stand”.

While it’s not a criminal offense to disregard the province’s vaccination proof requirement, there are steep fines for those who flout the rule. City staff warned council that fines for failing to follow health guidelines are $10,000 for the first offense and $50,000 for the next offense. Councilors and the chief executive could also be personally fined, staff said.

Com. Jodi Crook told the meeting that he was against the vaccine, but it was a requirement at his workplace.

“I wasn’t a fan of it, still not a fan,” Crook said. “What the government is doing to me is just unethical.”

Crook added, however, that the municipality is dependent on the province for funding.

Com. George El-Jakl pointed out that the vaccination rate for the tri-county area is 64% and that he had to make “the best decision for the greatest number of people”.

Another adviser, Shaun Hatfield, said it would be a “false layer of democracy” to prevent vaccinated people from using public facilities.