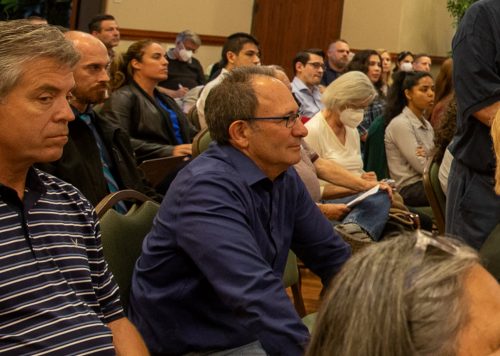 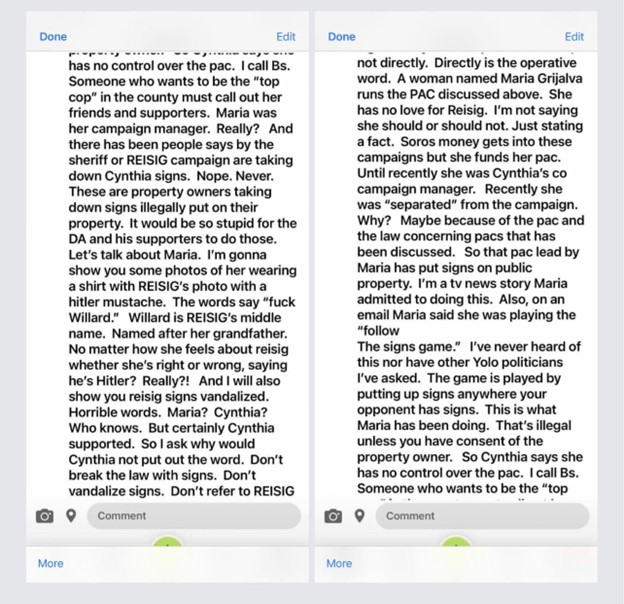 In recent weeks, campaign signs for challenger Cynthia Rodriguez and incumbent Jeff Reisig have been removed by owners who claim the signs weren’t allowed to be there, and there are allegations of stolen and vandalized panels.

Some of the signs belong to Maria Grijalva, the founder of Citizens for a Progressive West Sacramento (CPWS), and support the Rodriguez campaign.

Grijalva says about ten of his signs were stolen.

According to some owners, Grijalva put up signs without their permission.

Yolo County even released a statement clarifying county laws regarding where campaign signs are and are not allowed.

On Nextdoor, Raven falsely tells Davis residents that Grijalva was a former campaign chairman for the Rodriguez campaign.

However, a deputy attorney general has been assigned to investigate the incidents related to the signs, according to an email obtained by Vanguard.

Raven’s main point in his Nextdoor chat to Davis residents was, if Rodriguez supporters were asked what they want in a DA, Reisig’s office is already doing 95% of that.

A letter from Marty Behrens, a Rodriguez supporter, published in the Davis Enterprise, disputes Raven’s assessment.

“The tragedy is that programs that could make us safer, like mental health diversion and restorative justice programs, are rather tightly controlled by this DA and never given the resources and independence that would best serve our county,” Behrens said.

Raven insinuates that dog whistle George Soros campaign funds found their way into the Yolo DA race, of which there is no evidence – in either campaign finance records candidates.

“But a lot of that unfortunately is identity politics. People believe what they want to believe,” Raven said. “Facts don’t matter.”

No matter who was responsible for the controversy,

Raven thinks Rodriguez could have stepped in to stop Grijalva from putting up signs in places that sparked controversy.

“So Cynthia says she has no control over the PAC,” Raven said. “I’m calling bs.”

He thinks someone who wants to be a district attorney needs to be able to call out or control their friends and followers.

Raven, apparently on behalf of Yolo DA Jeff Reisig, denied claims that sheriff’s deputies were used by the DA to remove campaign signs.

“There were people who said sheriffs or the Reisig campaign were taking down signs,” Raven said. “No never.”

This despite the fact that two deputies came to Rodriguez’s house to have him remove the signs that the neighbors had put up. Even though it was before the campaign period to be able to post campaign signs, it was their property, something now used to remove signs that are on the edges of private property.

The Reisig campaign could not be reached for comment.

The Rodriguez campaign maintains that its signs follow the law and reiterated that it has no control over what other supporters or PACs decide to do.

There are about three weeks left until the June 7 primary.