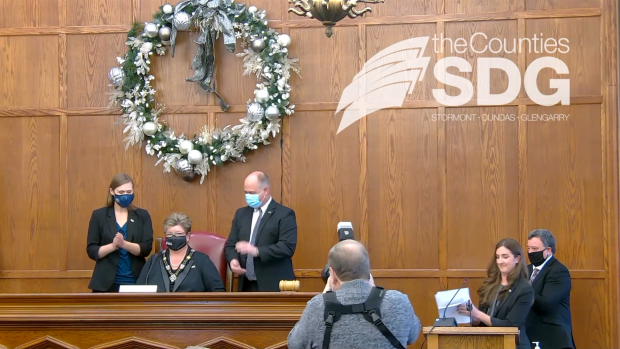 CORNWALL, ONT. — The new Warden of the United Counties of Stormont, Dundas and Glengarry was officially sworn in Friday in Cornwall.

Carma Williams becomes only the second woman in 171 years to hold the post of director, after Estella Rose took the job in 2008.

“For me, this is an auspicious occasion. Being only the second woman to have the honor of holding this position, I do not lose sight of the fact that it is a privilege to occupy this seat”, Williams said in her speech, mentioning that gender parity is slowly moving forward and is needed at all levels of government.

“There is still work to do. We have not yet achieved gender parity in federal, provincial or municipal governments, but we are getting there,” Williams said. “We heard a lot about it today and we’re getting there, and I’m a proud example of progress.”

“It’s unfortunate that we still have to make quite a fuss for a woman to become manager,” said North Glengarry Mayor Jamie Macdonald. “An interval of 15 years between Estella and you is far too long, we must encourage more women to enter municipal politics.”

Williams’ top priorities for the next year include a rural education strategy, focusing on the environment and continuing to foster great partnerships in the United Counties.

“Partnerships are critical to our success,” Williams said. “We are stronger if we work together.”

The entire inauguration ceremony can be viewed on the SD&G Counties YouTube Page.