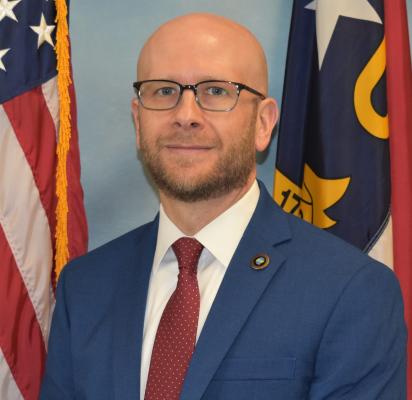 The Adult Corrections and Juvenile Justice Division has appointed Ben Anderson as the new Warden of the Piedmont Correctional Facility in Salisbury. He had been deputy warden at Raleigh Central Jail.

“Director Anderson has a remarkably deep and broad experience gained over two decades of service in our prison system,” said Todd Ishee, Commissioner of Prisons.

“He served with excellence in a number of prisons with very different missions and purposes. He now joins our team of guardians who work so hard to protect staff, offenders and our communities with care and compassion,” added Ishee.

In his new position, Anderson is responsible for all operations at Piedmont Correctional.

The facility houses male offenders in minimum and medium custody and is a designated processing center where newly arrived offenders are assessed for appropriate housing and program assignments within the prison system.

A veteran of state government, Anderson began his career in 2000 as a correctional officer at Foothills Correctional Facility and became a case manager there in 2003. He rose through the ranks of unit management to until he was promoted in 2013 to Deputy Superintendent of Caldwell Correctional Facility. .

In 2015, he was appointed Deputy Director of Programs at Alexander Correctional Institution.

In January 2019, he was again promoted to director of the Burke Containment in Response to Violation (CRV) center in Morganton. CRV centers house and provide intensive behavior modification programs for those who have committed technical probation violations. CRV centers incarcerate offenders for 90-day periods in response to violations of probation, parole, or post-release supervision, as provided for in the Justice Reinvestment Act.

Later in 2019, Anderson returned to Foothills Correctional Facility as Associate Director of Programs.

He was appointed deputy warden of the sprawling Central Jail complex in 2021.

A native of western North Carolina, Anderson holds a degree in criminal justice from Western Piedmont Community College and is a graduate of the Department of Public Safety’s Correctional Leadership Development Program.

His hobbies include travelling, reading biographies, fitness and the occasional 5k run.

One of Andersn’s top priorities is to hire and retain high quality employees.

“We have good jobs for dedicated people who are interested in a career in public service, who want to help protect their communities and serve a mission greater than themselves,” he said. “These are important jobs.

“I look forward to joining the Piedmont team with a vision to provide services aimed at reducing recidivism and an opportunity for our prison population to change their lives for the better,” he said. “We will do this through a culture of safety, transparency and mutual respect. This work is important to our state and its citizens.

At Piedmont Correctional, Anderson will lead a diverse and complex prison operation.

At this designated treatment center for newcomers, offenders undergo a series of diagnostic assessments that will determine future prison assignments. Many offenders are in Piedmont Correctional with short stays because they are being processed in the prison system or receiving medical or dental services.

The prison has a 14-bed infirmary and an outpatient medical center with X-ray, EKG, laboratory, IV therapy, and minor surgery capabilities. A three chair dental clinic is staffed full time.
Correction Enterprises operates an upholstery plant at Piedmont Correctional. Other prison offenders may work as cleaners or kitchen helpers.