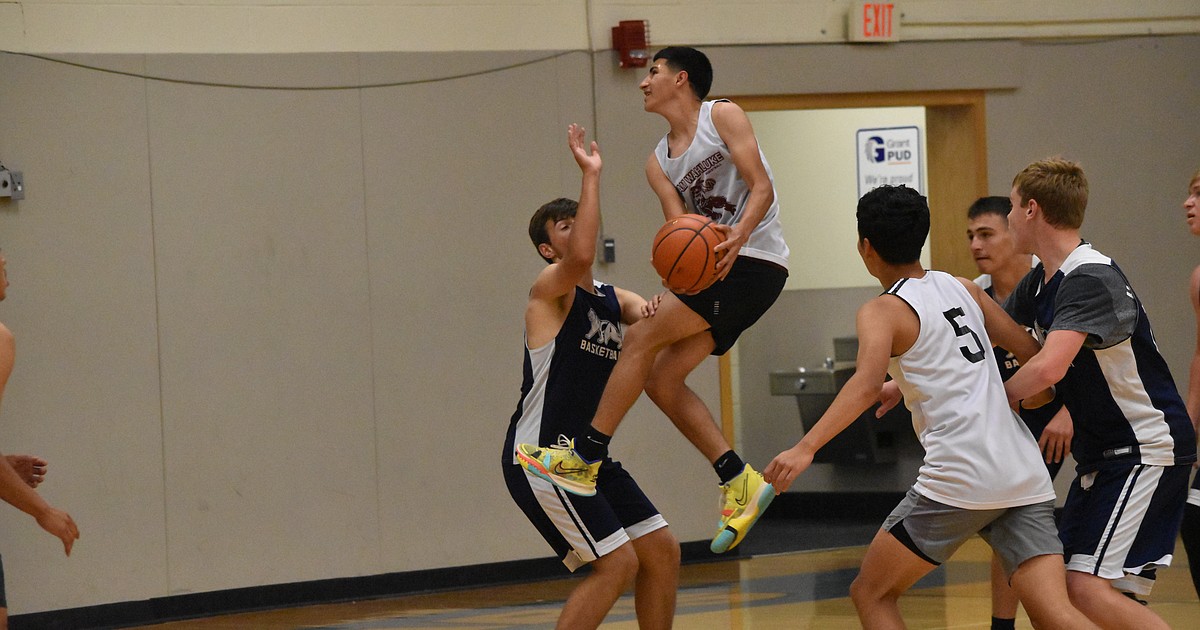 DIRECTOR – Only a few days after the end of classes, summer basketball has already arrived in the Basin. Warden hosted an exhibition for summer teams from three local high schools.

Moses Lake Christian Academy/Christian Covenant School, Wahluke and Warden squared off Wednesday night at Warden High School in one of the first shows of the summer.

The three teams, all in different seedings, had only a handful of practices ahead of Wednesday’s games. MLCA/CCS had three practices, Wahluke eight and Warden four.

For the exhibition, things were a little different. Each game consisted of two 20-minute halves with the clock running, fouls resulted in a free throw worth two runs, and each coach only got three timeouts.

MLCA/CCS, despite being the smallest school there, got an early jump over Wahluke 8-2 just five minutes into the game. Quickly enough though, Wahluke bounced back to trail MLCA/CCS by one at the 7 minute mark.

For the remainder of the half, the Lions and Wahluke battled for the lead, but the first half ended with MLCA/CCS ahead 21-17 over Wahluke.

Both teams came back strong and after three minutes it was tied at 23 all. The Warriors took the lead, with MLCA/CCS trailing about seven points midway through the second half. The MLCA / CCS was not going so easily and came back tied with 37 points seven minutes from the end. The two teams tied again at 42 points with two minutes left in the game. Wahluke managed to pull through and win the match 49-44.

A few times in the game, you could hear the crowd shouting “same team” because two Wahluke players were battling for the ball.

Warriors coach Clayton Buck said he thought it showed effort on the part of his players and that he would rather they tackle the ball and fight for it than sit back and watch.

MLCA/CCS coach Emerson Ferguson said he was really proud of his boys because not only had they only had three practices, but they weren’t part of a full squad and some many players were new.

Wahluke started the game with possession from the end but the ball was quickly handed to Warden. However, Wahluke was first on the clock and quickly took a 6-0 lead over the Cougars.

The Cougars fought back, trailing the Warriors 9-10. It was neck and neck for a short while, but Warden couldn’t take the lead. Wahluke wasn’t going to let Warden get the upper hand and did a quick job of keeping the lead. Wahluke led 37-23 at halftime.

In the second half, the Cougars worked to close the gap but failed to catch up. Wahluke won 49-39 over Warden.

Goalkeeper coach Brent Erdmann said he sees the benefit of exhibition games like this where not all calls can be made.

“That’s why I’m a big fan of the summer ball. They have to play in contact, they have to play through adversity even more, I mean, just two officials, everything is faster, more in your face and nobody is really in good shape, so I love that”, Erdmann said. “If I can make their brain work, their body might not, but if their brain works, we teach IQ and I think that’s huge.”

Similar to the game against Wahluke, MLCA/CCS quickly took a 7-0 lead over Warden by five minutes. Within the next five minutes, Warden steps onto the set and picks up speed on the Lions.

Since this was an exhibition, there were more quick breaks than setting up a play, but Warden seemed to attempt them most of the time. Perhaps that’s why Warden was able to come back to level the score at 19-all at the end of the first half.

In the second half, Warden came out refreshed and ready to fight. They took the Lions lead and never gave it back. Goalie won 52-34.

Emerson said his only expectation was for his team to come out and play. He knew it would be difficult without a full squad, with the squad still not in good shape and with so few practices to better synchronize their teamwork.

Buck and Erdmann agreed that school size, especially during the summer league, doesn’t make much of a difference as there can be talented players on any team.

Rebecca Pettingill can be reached at [email protected]

Minecraft Warden 1.19: everything you need to know